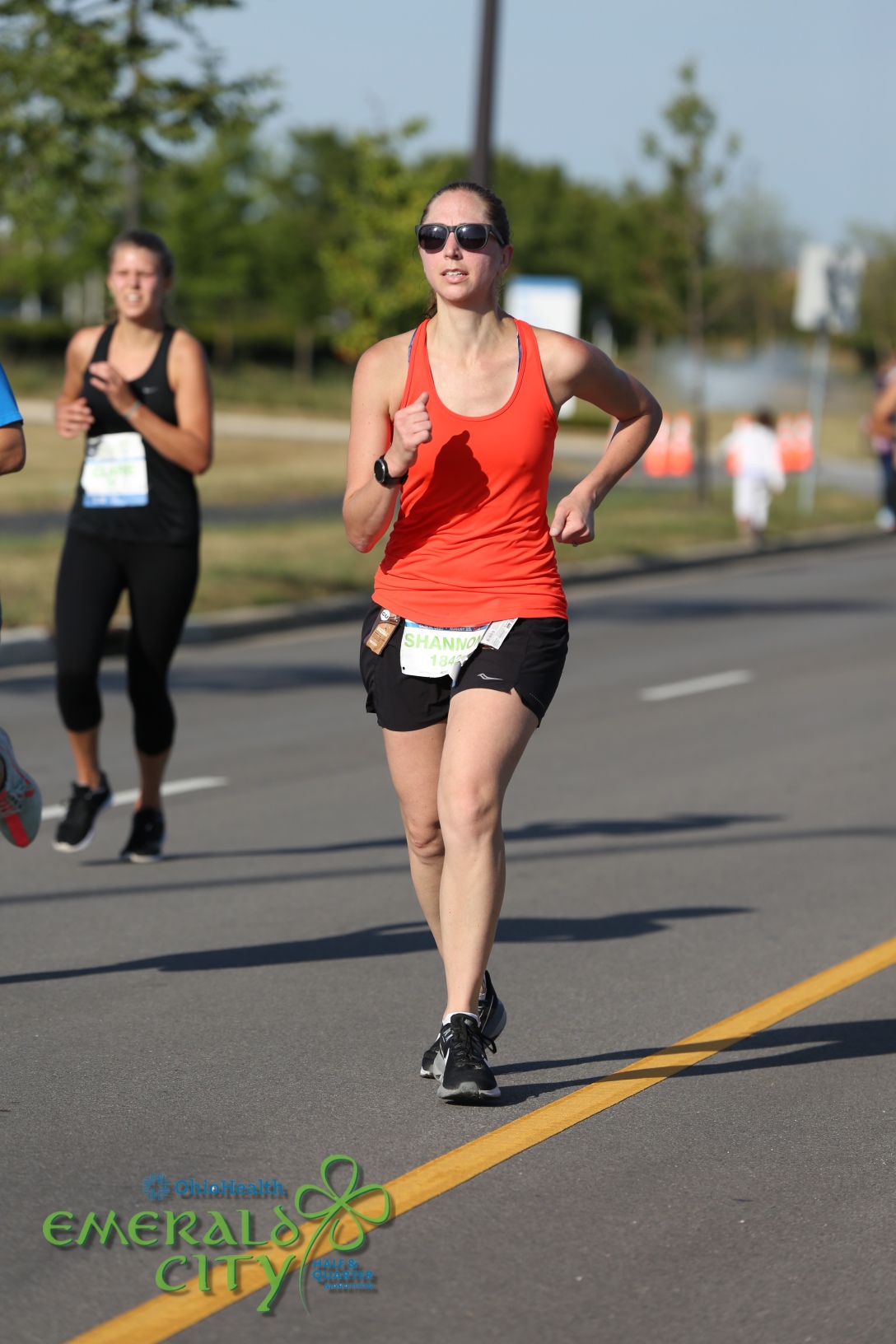 Just over a week ago I ran the Emerald City Half Marathon in Dublin, OH. My coach requested that I run a half marathon as race training for the Chicago Marathon. As I have never run a race to prepare for another race before, I wasn’t sure how this race would be different than other half marathons I’ve run.

I travelled to Ohio on my own as my husband had to work. I’ve never traveled to a race alone before (I did drive to Mississippi once for a marathon alone, but an ice storm cancelled it at the last minute, so that doesn’t count). While I love having support, it was kind of nice to have some quiet time to myself to frame my mind into race mode. After getting to the hotel, I did some yoga, had some dinner, hydrated, and relaxed until I fell asleep.

Race morning I awoke at 4:45am. I didn’t know what the pre-race area would look like, and I still had to pick up my packet. Nutrition was highly on my mind, as GI issues have become a glaring issue for me during long runs (you’re welcome for sharing). I ate a plain bagel and a banana. No coffee.

I was the first person at day-of packet pickup, promptly at 5:30am. After I picked up my packet, I started my two mile warmup. Warming up before a race is new for me. I’ve always thought I had to save my energy for the race, but this was a great way to calm my nerves and gain focus. Returning to my car, I popped 4 Imodium pills and headed to the Port-a-Potties. When I arrived, I enjoyed a pre-race show as sprinklers were spraying directly on all of the Port-a-Potties. To see people squealing as they ran to and from the restrooms getting a quick shower was absolutely entertaining, until a smart group of runners covered the sprinklers with traffic cones. Show over. Wah wah.

My coach told me my goal pace should be between 8:30-8:40, if all conditions were right. With temperatures in the low 60’s, no precipitation or winds, and a 7a.m. Start time, conditions felt perfect. Initially my pace was on point, but that became challenging quickly. There were a some rolling hills, which became a challenge after the first couple had passed and more were to come. The mental obstacle also came as I realized the mile markers were off. At first I thought it might be my watch, but when everyone’s gps watches beeped at the same time and the mile markers were .1-.2miles off, I became distracted. Does this mean I’m running longer? Are these markers off and the race is still 13.1 miles? (My watch, as I crossed the finish line, read 13.23 miles. I think that’s longer than a half marathon, even considering human/runner error). By mile 9 I was questioning why I run and why I run marathons. Pain was starting to settle in, and my stomach didn’t want to take any gels. I forced one gel down, but that’s all I could get. The only option I had left was to push as hard as I could to get it over with.

I still managed to get a sub-2hour half marathon, but that was not the time in envisioned. The pain was so intense after the race that I crossed the finish line and walked directly to the car (I did my 1 mile cool-down run after I got home). After rushing to my hotel room, the Imodium wore off (sorry for the TMI, but this is a current struggle). If I can barely get through a half marathon, how can I get through a marathon? I maxed out the dosage of Imodium and was super careful with my nutrition?! My right IT band was inflamed. Not only did my hip hurt, but my hip flexors, quads and hamstrings were screaming. My back and core were tired as well. This training cycle has included more cross training and stretching than I’ve ever done before, how could this be??

Check back in a couple of weeks to see my progress on my takeaways.